I had nothing, then this mic dropped. It’s an email FFRF posted today. I need to send them some dinero for helping me out.

Now, it is out of “love” that this Gary person sent this. (CAPS, spacing, spelling, and punctuation are all GARY’s). He removed all our excuses (what a jerk).

“I WANT YOU PEOPLE SAVED AND NOT GO TO HELL FOR ETERNITY . SO PLEASE LISTEN TO ME BEFORE ITS TO LATE FOR YOU . YOUR ETERNAL DESTINY DEPENDS ON IT . I MUST WARN YOU PEOPLE – JESUS IS VERY REAL . YOU ARE LOST WITHOUT HIM AND WILL DIE IN YOUR SINS . HELL IS A REAL PLACE – SO IS HEAVEN . DON’T BE A FOOL AND REJECT CHRIST . I PLEAD WITH YOU OUT OF LOVE . HELL IS A PLACE OF ETERNAL TORMENT WHERE THE DEVIL AND HIS DEMONS WILL ALL BE . YOU WILL GO TO THIS MOST TERRIFYING PLACE IF YOU DON’T REPENT . I GUARANTEE YOU WILL HAVE A RUDE AWAKENING IF YOU DON’T LISTEN TO THIS MESSAGE . ONCE AGAIN DON’T BE A FOOL ! THIS IS REAL AND GOD DOESN’T MESS AROUND . YOU ARE WITHOUT EXCUSE NOW – ALL OF YOU . — Gary”

God doesn’t mess around, and Jesus IS VERY REAL: Gary guarantees it. There we have it, right?

Okay, let’s say I repent (for what I’m not sure). I get my Irish ass saved (from Hell I guess). Presumably after I die, I will not have a rude awakening (but I will remain doornail dead).

I am sitting here reading the Ten Commandments wondering which of them Gary thinks I’m going to Hell for. Jesus is not mentioned. I believe in No Gods, so with one exception, I am good for the first one. No false gods and all that. But, the graven image shit may doom us all.

I’m not sure I know what #2 means, but when I swear, I seldom involve deities. Now I am a fan of the late George Carlin, who, presumably, has experienced his rude awakening. In persona, I’ve been compared to him, but I’m not even close to that funny. Anyways, when I cuss, I use four of George’s seven dirty words: shit, fuck, cocksucker, and motherfucker. I don’t consider cunt, tits, or piss swearing when used on their own. Back to Commandments.

I’m good with Mom & Dad. Lately, I’ve not killed anyone without repenting. I have not adulteried (made-up word), stole, false witnessed, or lusted for or with any of the neighbors. I like my stuff better than theirs, so I’m non-coveting. I am not sure what I could do to fuck up a Sabbath anyway, or which day it actually is.

So here’s the thing. I’ll be going to Hell for ETERNITY, according to Gary and his fellow (loving) pacemakers (that was a 1960s band) because I acknowledge the fact that there is no evidence whatsoever that any of the 5,000 or so gods man has created ever existed. Anything else? Nope.

Have a wonderful weekend and stay away from Gary. 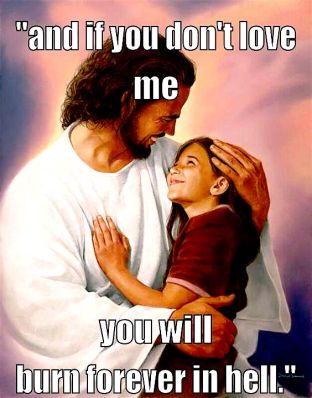 6 thoughts on “And They Say I Cliché”